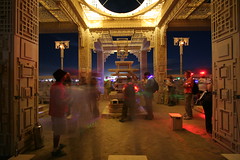 here, friends, is the second part of this month’s buddhist carnival. the first part is here. enjoy!

forgiveness
andrew, on his blog rants of a gay lunatic (i have to confess that such a title immediately makes me perk up my ears) does not directly mention buddhism in his article why we must forgive president george w. bush but i’d say it is exactly in line with buddhist thinking:

we are trying to change the world and re-create a great country. i have said that george w. bush has failed as president, and i have said that i forgive him. i will take that a step further and say, “thank you for trying.” i am convinced he did a better job than i could have done. i appreciate his ambition and bravery in accepting – indeed, pursuing – such a responsible position. i don’t envy that responsibility and i don’t envy bush’s lack of popularity. but i do appreciate his attempt, and i wish him well in his retirement.i hope that we will all be able to forgive president bush. not everyone can be a great president – or a great anything for that matter. but in order to create and re-create and continue to create a great and a good nation, we must move past our anger and move on to love, acceptance, and forgiveness.

self-expression, self-less expression
wayne always has something interesting to say, although one of these days i have to get around to asking him why his zen blog has become so insanely busy visually lately (or i guess i’m doing this right now). one of wayne’s interests is how we live in our bodies. this article, self-less expression, is part of that series:

the goal is not to figure out we have a body, only to “give it up,” and become all spiritual. it’s about accepting ourselves exactly and precisely as we are. and then, finding a way, or multiple ways, to be the totality of who we are.

simplicity
and here, from the tao of simplicity:

ever since i became interested in simplicity, minimalism, and the present moment, i have become more sensitive.

the most powerful number is zero! excess information causes paralysis and represses you!

i see that people (including me) have a tendency to take too many notes, hold onto too many emails and paperwork.

what else do we have? “glowing face man” wants to awaken the badass within (a worthy goal, wouldn’t you say?) and says “pause and look at the world around you: it will end in a moment.” the daily mind proposes that we meditate at work:

we spend most of our lives at work. some of us will have the same job we have now til the day we die and we will be there from nine til five every single day. if we do not use our work time carefully we will waste a significant portion of our existences doing something that we resent. the way to change that is with meditation.

and our friend anmol, who has also been seen here numerous times, shares his experience with raising enlightened children:

the one thing that children need, is your simple, unadulterated egoless presence and attention. it is the most important thing for them to have, and is the key to providing them the right atmosphere to grow freely and fully. here are some important highlights of what this translates into.

and that’s it for now. the next edition will come out on july 15, 2008. remember, if you have an article about buddhism you would like to see featured here, please use this submission form. also, if you’d like to host a buddhist carnival, talk to me!

(image of temple of forgiveness at burning man by almost jaded)