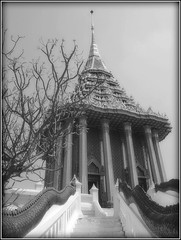 hello there. been looking forward to this edition of the buddhist carnival for quite a while because the last one was a bit on the stunted side, what with being busy with NaNoWriMo. so this month’s edition has a bit more meat on it; in fact, your teeth will get quite a nice workout. i’m calling this one the not-so-fluffy-edition for reasons that will become easily evident.

the poem!
we always start this with a poem. first zafu frog. thank you for contributing the poem this month, pithy and true:

“i don’t know”
zen moments talks about not knowing. having been confronted, uncomfortably, with the question of “and what do you do?”, he finally found an answer:

it came to me in the shower, while absent-mindedly washing my hair, when i wasn’t trying to solve anything.

in anyone’s life, there are going to be times when everything seems to be going well, and when you have a sense of purpose, when you are clear about where you’re going in life.

but in the same life, there are also bound to be times when it’s not clear, times when you do not know. for some people these might be brief interludes. for others they might last longer, until things change.

but it’s impossible to have that kind of uninterrupted certainty for a whole lifetime.

so in anyone’s life, there are going to be times of not-knowing. and that has to be ok.

this reminds me once again of the best thing i took from seeing the dalai lama this year: his utter confidence in shrugging his shoulders, grinning, and saying, “i don’t know.”

ignoring vs. responding
at sword mountain, a blog that talks about zen and aikido, a question from a student regarding irritating questions.

the answer is non-trivial. to investigate this, you should consider this question from two points of view, your own and the questioner’s.

– from your own, ask: if i ignore a thought, where does it go?
– from another’s, ask: is ignoring a question not itself an answer?

once an something becomes part of your consciousness, you have no choice but to respond. so, how does one properly respond? zen looks for precisely the same thing that aikido does:

a clear, spontaneous, and appropriate response to your circumstances that restores harmony.

“when words are both true and kind, they can change our world.”

like many fake buddha quotes, this one has a nice sentiment. the buddha often talked about the virtue of words being true and kind, but the language of “changing the world” is not something the buddha is recorded as using.

this deserves some thinking. the buddha talks about change as a condition, not as something that we engineer. at the non-phenomenal core rests changelessness; realizing that is what buddhists hope for, not changing the world. in the process of that realization, we notice that phenomena (words, weather, people, etc.) change. the bodhisattva – the person who has realized or fully comprehended changelessness – remains in the world of phenomena and works to do the right thing but she or he is not specifically intent on “changing the world”. one moment at a time, she or he feeds a homeless man, waters a sapling, pets a cat. she just does it. a changed (different?  better? more realized?) world is a side effect.

the connection with the title of my blog does not escape me, especially since i just wrote about it in my previous post.  definitely something to think about.  thanks for the inspiration, bodhipaksa!

fake buddha teachers
over in finland, at the possible way we have another blogger talking abot fake.  a bit of a rant, aptly titled  true zen (TM) – order your DVD right away!

sometimes some are thinking that buddhist practitioner should keep his/her mouth shut and close his/her eyes when others are doing terrible things against buddhism and other people. man, that is so lame… being a buddhist doesn’t mean that you have to close your eyes and cry in the corner

buddhism and the vikings
let’s stay in northern europe for a moment longer. zen dirt zen dust has a guest blogger who talks about the parallels between buddhism and asatru, a (revived) old norse religion

i am an asatruar. asatru, literally translates from old norse as “true to the gods”, is the modern revival of the old norse spiritual belief system.

i share with buddhists the notion that my actions have an immediate and lasting effect on myself, and by extension this world, and positive actions create a positive world. even though, to me, these actions may have implications in the next world, my primary concern is that beneficial actions benefit those close to me now, and detrimental actions are harmful to this world and to those i hold dear. much like buddhist philosophy, as i understand it, i am emphatically concerned with my impact on the world as it is now, and i strive to perform just and honorable actions for the sake of the world around me

no earth-shattering insights, just hard work and no expectations
the good people at the tricycle blog discuss the memoirs of former tibetan buddhist monk stephen schettini novice: why i became a buddhist monk, why i quit and what i learned. schettini is now the director of thequietmind.org and says

i don’t promise perfect peace, earth-shattering insight or transcendental breakthroughs. on the contrary, i ask my students to work hard, and especially to beware their own expectations. we’re all twenty-first century grownups and as much as we want to believe in easy solutions and magical formulas we know perfectly well that a down-to-earth approach will pay off more than all the mantras, visualizations and promises of enlightenment on the world wide web.

gentle, peaceful buddhists – an illusion?
the following is anything but a heartwarming story: it’s about a mob of buddhists attacking a christian church in sri lanka. at the american buddhist, there is an insightful comment on it. the writer was working at a military hospital in sri lanka and met a young soldier who wanted to become a suicide bomber and kill tamils.

this soldier was ordained as a monk when he was five years old and spent his time until the age of 18 in various temples in kandy, ampitiya and colombo. he told me that since he entered the robes most of the nights he was sexually molested by older monks. some nights he was raped by five or six monks. he disrobed and joined the military as an escape route. the traumatized soldier focused his anger not towards his abusers but towards the tamils. after hearing this firsthand account whenever i see monks go in to violent protests i suspect the elements of sexual trauma.

while this is sad and alarming, it serves as a reminder that just calling yourself buddhist doesn’t do a thing. buddhist, hindu, baptist, atheist – we’re all capable of committing atrocities. “we” – that includes me. if i don’t keep my awareness sharpened and my heart soft, i, too, can fall into the trap of violence – subtle or otherwise.

losing more illusions
how does one reinvigorate one’s practice after losing the illusions that brought one to practice in the first place? hard core zen has something to say about that. it’s a different kind of illusion than the one alluded to above – it’s the one that many of us first had when we started tinkering with meditation and buddhism. the neat (and sometimes infuriating) thing about buddhism is that it helps lose all illusions – the ones we don’t like but also the ones that decorate our lives with cute stickers and fluffy rainbows.

working with people who are homeless
another story about someone who decided to stare reality straight in the eye, about a lot of things. this woman’s experience with buddhist communities have been mixed.

she would have continued living at the zen center, but she began to run into problems there.

when the zen center asked her to train a group of beginning monks to assist with the homeless meditation program, drakka pushed back. “how do you train people to be alright with homelessness?” she refused.

fortunately, that didn’t deter her. this is a great article on how jana drakka keeps working with people who are homeless, regardless of the obstacles.

that’s it for this month. hope you found a little tidbit that can accompany you on your path. good day buddha, good day dharma, good day sangha.