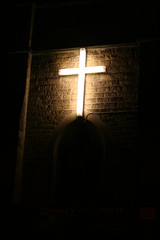 yesterday i went to a christian church service for the first time in 1 ½ years. the last visit had been to a crammed, tiny african-canadian church, a memorial service for one of vancouver’s downtown eastside heroes, a little old matriarch who had taken the whole neighbourhood under her wings.

yesterday was a four-church service at a big baptist church. very different. i have to say that soon i felt uncomfortable. many of the reasons why people turn their backs on christianity came up for me. for some reason, however, i didn’t want to wallow in criticism. i wanted to hear the message. what was the underlying message of love, of sister and brotherhood, of walking with the divine? it was very hard, almost like wrestling with demons. i sat there crying with the effort and with sadness and frustration but i didn’t want to give up.

finally it occurred to me to take notes during the sermon. this focused my attention and by writing down only the ideas that resonated with me, it was easier to stay with the positive rather than with the filter of criticism that was just spoiling to take over the whole experience.

what did sound true to me was this: the figure of jesus stands for doing what is right, against all odds, without compromise. the cross can be a symbol for utter defeat, shame, and being the absolute outcast (cast out of life, even). however, it was such a symbol in the context of roman tyranny. so while there is great pain involved, in the end (yes, literally in the end), being cast out of tyranny is a positive turn of events. dying on the cross is dying out of tyranny.

there is always a seductive element to tyranny.

of course some of you might wonder why i even bothered to go to church, and on top of it, why i bothered to work so hard at trying to sort at least some of it out.

i suspect that some of it is simply because it is my legacy. my grandfather was a lutheran minister, and that was a strong influence in my life.

but also, i truly believe there is great value in christianity. to me, the message of love, compassion and justice despite even the strongest resistance is nowhere else as clearly and passionately expressed as in christianity. the call to express and experience love of the divine both in private contemplation and in fierce action – where else is it as strong as in christianity?

another observation i made was of the sombre atmosphere in the church. it wasn’t pleasant but the thought struck me that there is something comforting in knowing there is a place where we don’t have to constantly be happy, where there is room to say, yes, life sucks big time. that is probably one of the attractions of christianity.

one more thought: numerous times when i was sitting in that service and listening to what was said, i cried out inside myself, “this is so wrong!” i was so strongly convinced that these ideas were wrongheaded, pernicious, anything but life affirming. it did occur to me later on, though, that my thoughts and practices might seem just as untenable to many of the people in that church as theirs did to me. intellectually this is a given – yes, we know there are hugely different ideas out there regarding religion, and that there is a great and acriomonious (and often deadly) distance between the various different camps – but i felt this on a deeper level yesterday. and it brought a bit of compassion and respect.

well, it’s good to get all of this off my chest.

and … quite a while ago i had suggested to my blogger friend jan to have a friendly conversation about atheism and spirituality. what do you think, jan, is this a good place to start?