what’s the goal of therapy?

“to minimize the client’s central self-defeating outlook, and to acquire a more realistic, tolerant philosophy of life.”

that is one of the the central tenets of rational-emotive therapy (RET), founded by albert ellis in 1955.

albert ellis died yesterday at the age of 93. 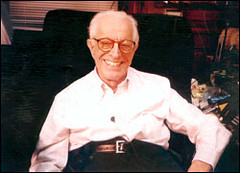 albert ellis walked his talk. he was a humorous, brilliant, sensitive, perceptive and stimulating man. he also didn’t mince words. i remember when i first started studying psychology, that was one of the things that i found attractive about him. apparently, he stayed true to this until the end.

supposedly, he had a falling-out with the albert ellis institute- but that did not keep him from sticking to his stoical values: the board members were, he said “fucked-up, fallible human beings, just like everyone else.”

that’s a realistic view of most of the animals of the genus homo (the members of which are sometimes more sapiens, sometimes less). ellis always liked to point out both sides of our coin. we have a propensity, he said, to

and on the other hand, we also have tendencies to

ellis was the man who coined the phrase “don’t should on yourself”.

according to ellis, the therapist’s first task is to assist the client in realizing all the irrational shoulds, oughts and musts with which they are burdening themselves. the role of the client is to learn to live more logically and rationally problem solve.

thus, ellis is often seen as one of the fathers of cognitive-behavioural therapy (CBT), the most widely espoused therapeutic method these days. however, unlike in some CBT theories, the relationship between therapist and client is central. says gerald corey:

“therapists show their full acceptance by refusing to evaluate their clients as persons while at the same time being willing to relentlessly confront clients’ nonsensical thinking and self-destructive behaviour.”

also, unlike some CBT, ellis’ approach, deeply influenced by philosophy, is part of the humanistic therapies. it’s not a quick fix – it is thoughtful, holistic and engaged.

some of the ideas in RET that i use in my practice are changing one’s language, which helps changing one’s thinking process; imagery; role playing; and homework assignments.

albert ellis was one of the most influential psychologists of the 20th century, and one of the “first generation” psychologists who initially embraced freudian psychoanalysis with great passion. ellis founded RET when he became disillusioned with that process, finding the therapist’s role too passive.

ellis is the person who first advocated the idea of separating the behaviour from the person (“you can judge the behaviour but accept the person”). also, rational recovery, an approach to alleviating addiction for people who do not do well with a 12-step program, is based on his work.

ellis is quoted as saying, “i hope to die in the saddle seat.” it sure looks like that’s what happened.

for another article i wrote on albert ellis, go to albert ellis: empirically, logically and self-helpingly